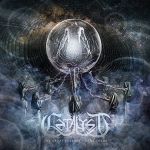 Despite the fact that the name CATALYST was used before (not only in the Metal scene), four guys from Metz in France decided to choose that moniker for their band in 2016. The year of their formation already saw their first digital release, an EP called “Dawn Of A Dreadful Fate”. It took CATALYST nearly three years to find a label and release their first full album “The Great Purpose Of The Lords” that is now my topic. And it’s not a very nice topic to talk about, as this album is in my ears a typical case of overambitious music. CATALYST put too much, sometimes very contrary ideas in their compositions and thus created music that overstated its case. But that’s not the only problem of the album, as the compositions tend to be too long. The opening instrumental ‘Omnisicient Bodies’ already hints on this big problem of “The Great Purpose Of The Lords”. And the more than ten minutes running first real tune is just underlining it. ‘An Unworthy Covenant’ is an awry mix of complex brutal Death and melodic Death, with added epic parts and sometimes strange acoustic breaks. And this mixture, that dominates the whole album, is anything but easy listening. Another irritating thing is that in the long run of the album, a lot of the songs blend into each other. Thus the album seems to be comprised of only three or four way too long songs. And this is definitely counterproductive to the audibility of “The Great Purpose Of The Lords” either. Whichever way you look at it, CATALYST released an pill that’s hard to swallow. In case you are searching for a musical challenge, visit www.facebook.com/catalystfr or www.facebook.com/greatdanerecords