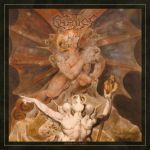 To be honest, I haven’t been paying much attention to the Finnish Heavy Metal scene. Though that might be a wee mistake, now that High Roller Records has opened my eyes with releases of two splendid bands, SATAN’S FALL and CHALICE, the latter band whose debut album I am going to give a few words here. It took me a couple of listens to get this record under my skin. At first it seemed a tad dull and another run off the mill. Though as the album received more spins, a quite interesting world of slightly progressive and epic Heavy Metal with a good deal of nuances and great details opened. The music is driven by great guitar melodies, fine leads and captivating rhythm patterns, the basslines and drumming are quite profound and work really well with the overall atmosphere of the album. The vocals didn’t latch onto me at first, but again they grew exponentially with the number of listens the album received. Compared to the multi dimensional music, they are in a way quite one dimensional, even though there is a certain range they work really well within, and heavy-laden, but in this context, the vocals are a safe harbour, and they do have their charm! CHALICE is doing their brand of melodic Heavy Metal quite good, they are hitting off a great atmosphere and the epic incorporations in most songs are quite good and a little traditional doominess here and there. The quietness of the last track ‘Stars’ is really good, and the female vocals who backs up the main vocals a few times, are a great addition as well. The opening track ‘Night’s Hand’ is a good tour de force of what the band delivers, and all in between are enthusiastically performed with good energy. I reckon the epic side of IRON MAIDEN is the big inspiration here, even though they never hit it on that note, though who does, besides the masters themselves? Though there is a darker touch to CHALICE and quite some Rock’n’Roll here and there. Enter the trail of pestilence: www.facebook.com/chalicefin, www.hrrecords.de