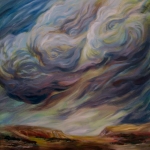 CHAPEL OF DISEASE
...And As We Have Seen The Storm, We Have Embraced The Eye
(Ván Records)
47:42min

Formed 10 years ago, this entity of mystic Death Metal has released their third album now… a band that I am already a fan of, due to their fantastic interpretation of morbid Death Metal, named after songs from the mighty MORBID ANGEL. They decided to leave behind a comfort zone in their way of doing music, thus maybe risking fans, yet without a doubt they will gather new ones. Now, they are still an extreme Metal band, yet they have more traditional Metal sounds. Imagine if TIAMAT from the “The Astral Sleep” era meets ROTTING CHRIST from “Thy Mighty Contract” while METALLICA’s “Ride The Lightening” and VOIVOD from “Dimension Hätross” add some of their magic there. Yes, that might be close to their sound here. No longer a brutal Death Metal band, yet they are more mystic and ethereal. They still keep the brutal and killer vocals, yet the music evolved. It reminds me a bit of what other Germans have done like KETZER (another band which I like a lot in all their albums!) and to a lesser extent of the Swedes of TRIBULATION. Bands that are recovering the roots of Metal music and eerie Rock (some might call it Goth Rock, whatever). In the end the final result is a killer release of great music, very metallic, rooted in Death Metal music, yet not afraid of incorporating sounds that for some of us, that have been loyal to IRON MAIDEN, MOTÖRHEAD and JUDAS PRIEST, but also to more extreme forms of Metal, blend perfectly. Yes, those looking for speed, gore, death and brutality can look elsewhere. Those more adventurous looking for music with a different touch far away from the conventional, yet still with the aura of darkness covering their corpses, will surely enjoy this one. And I do that a lot! www.facebook.com/chapelofdisease, www.van-records.de