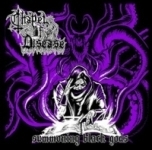 References to ASPHYX, MORGOTH and the likes nowadays tend to make me yawn since there are quite some bands out there meanwhile quoting these classic and still to the very day strong acts as musical comparisons. However, in the case of CHAPEL OF DISEASE’s fabulous debut album “Summoning Black Gods” we are presented with a record that is way too good to be just dumped in a garbage can with numerous low class copycats. By adding strong Thrash Metal elements, melodic and well done leads and morbid lyrics and artworks that set a proper gloomy horror atmosphere, bands like POSSESSED – vocalist Laurent perfectly barks in the Becerra-style while sounding quite Van Drunen-ish when doing longer screams and roars – or CELTIC FROST (just check the long closing opus ‘The Loved Dead’) can be named as reference points as well. While being orthodox and unsurprising in its sources of inspiration, the quality, intensity and spirit of this over 40 minutes long, relentless opus is astounding and especially the bang-able thrashing elements – that made me think of early PESTILENCE, MASSACRE, DEATH, too – and actually quite catchy riffs (the main one in ‘Summoning Black Gods’ I whistled along for days, haha) caught my interest immediately and thus I fell in love with it asap! Rounded off by a flawless, heavy production this is a totally remarkable follow-up to the band’s 2010 “Death Evoked” demo (whose 4 songs can be found here as well) and split 7” EP with LIFELESS. Another plus is the guitar sound – whereas a lot of bands seem to hide a lack of quality riffs by detuning to a rotten, abysmal rumbling CHAPEL OF DISEASE keep things at a more regular tuning allowing you to identify and enjoy some damn fine riffs. Though every younger old school Death Metal act out there has to face the fact that the shadow of the genre’s titans is too big to compete with – at least as long as you do not create something truly new or special (e.g. like NECROS CHRISTOS did with their past albums) – CHAPEL OF DISEASE fulfill the categories of my personal Death Metal check list just nicely and I can just conclude with: get this fuckers! Again another killer release from Germany’s F.D.A. Records who currently establish themselves as a household name for first class (old school) Death Metal and CHAPEL OF DISEASE are another proof for us Germans having a kick ass Death Metal scene with bands like them, VENENUM, BEYOND, DESERTED FEAR, NECROS CHRISTOS, DROWNED, WOUND, DEATHRONATION, ALCHEMYST etc.! For all further information check out www.facebook.com/chapelofdisease, www.fda-records.com