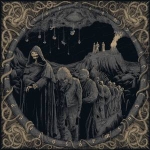 It has been 3 very long years since Germany’s old school style Death Metal machine CHAPEL OF DISEASE unleashed the debut onslaught "Summoning The Black Gods" and they did not disappoint with their soon to be released album "The Mysterious Ways Of Repetitive Art". I first got to hear these guys while listening to Death.FM and was blown away instantly. I’ve said it a thousand times, the Germans know how to produce some sick music. This album picks up where "Summoning…" left off and the formula has remained intact, 7 tracks running just under 50 minutes. No changing styles, no adding females vocals, no over-saturated keyboards, no sir… just some kickass Metal that will get your blood pumping. Thrashy and fast paced is what you get here and when they slow things down it is done in the right context of the song. The first track is an instrumental that sets up the ambience for a dark ritual. The production is pretty good, but I do feel that the bass guitar and bass drums could have used a bit more emphasis as they sound drowned out. The Teubl bros’ guitar solos on this record are done nicely and don’t go off on a pointless tangent even have a hint of 80s era soloing. The David Vincent / Martin Van Drunen vocals really pay homage to the Death Metal of old. Really the entire album stands out but I could not get enough of ‘Lord Of All Death’, that song just really encompasses the album. It is chalk full of good riffs and catapults the mind through a journey into madness. There is a hint of old BLACK SABBATH-ishness meets ASPHYX in track 5 ‘Symbolic Realms’. The song is just a trippy jam that starts out mid paced for the first couple minutes and then just rips into a ballistic assault. This whole album requires several listens and not because it doesn’t grasp the listener right away, but because it just is that good. This is one great album, plain and simple. Seriously, you can not go wrong by picking up this album when it is released (January 16, 2015). The elements for a headbanging journey are all there… chugging guitars, guttural vocals, fast drums, and catchy riffs. If you enjoyed their first album, then you will really like this one. Well worth checking out and a good addition to the collection. For more info: www.chapelofdisease.de, www.facebook.com/chapelofdisease, www.fda-records.com