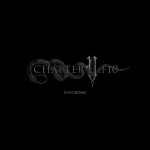 Very littel info is there about this two man band from the Ukraine, and this is their debut album. Starting directly with the music, the band plays mainly a very fast Black Metal style which can be compared to MARDUK and to some Black Metal era DARKTHRONE. But they also use some slower sections, while never losing a quite melodic edge in their approach. After a few more listenings, the guitar work comes out as a quite good one, with many creative passages, and the band is also capable of combining many different speeds through the album, with that subtle dark melody ever present. There is also a good dose of old Death Metal in there as can be heard in a few parts of the songs, which add more power and heaviness to their sound. And I cannot help thinking that the band is also influenced in some way by KATATONIA. This is the kind of album that grows with every listening and in fact a quite good one for those into Black Metal that although firm on their dark roots does dare to have a path of their own. Very good for a debut. https://bloodreddistribution.bandcamp.com/album/syndrome