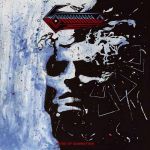 I do not like the name of the band. I do not like their logo. And I am not that fond on their artwork on this release either. Everything else in this release is AWESOME and that you must get it now. I can end the review here. But then again, that is not exactly what I will do. COMMANDO (no, I don’t like the name, damn it!) is a young Swedish band that is releasing their debut MLP on the great High Roller Records. And this is the kind of band that makes you proud of being a Metalhead. Their style… well, where to start? It is really hard to classify them. They call themselves just Heavy Metal, which is true to a certain point. I mean they do enter the Heavy Metal universe, but then again, it is more than that. To start with let’s talk about the guitars, the riffs… wow, every single note, every riff has been done with an impact in mind. They are melodic, yes, but also have a quite dark aura, nothing is happy here. In that sense they sound a bit like their country mates IN SOLITUDE and also to later TRIBULATION. The rhythm section is also fantastic, the bass is there and the drums, if maybe not exactly having an a complex performance, they do the job right and in-your-face. And then, the vocals. I have heard some criticism about the vocals, that they are a bit one-dimensional, and maybe too rough for the style. Nah, I just think the vocalist is great. Imagine a mixture between the late Paul Baloff and a less gruffer Jeff Becerra and you will get the point. Those vocals, together with the obscure yet melodic guitars give them a more macabre and obscure aura that many Black or Death Metal bands try and fail miserably. And remember, COMMANDO is not a Black or Death band although they have some influences. They are like those bands that in the 80s you were not sure if they were Heavy or maybe Speed or Thrash or something else. I can find references to early EXODUS, early FATES WARNING, POSSESSED, SLAYER and so on… but with their very own touch. They included an instrumental song, which is maybe the least powerful piece, and it is still a great song. They keep it in a very up-tempo mid pace, never getting into more than maybe Speed Metal territory, but as it is, for now they do not need to do something else. I have high expectations when they release their full length, and maybe they even can consider changing the band name and using better artwork… oh, well I am being a bit picky here. What a great release that gives me great memories, like listening to KING DIAMOND “Fatal Portrait” for the first time some 30 years ago. Yes, this is that good. www.facebook.com/commando-swe-225600961156584, www.hrrecords.de