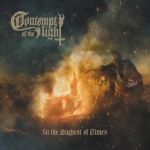 CONTEMPT OF THE LIGHT
In The Darkest Of Times
(Silent Watcher Records)
37:58min

UNANIMATED and DISSECTION, both acts can be mentioned as two foundation stones in the genre of melodic Death and Black Metal. Revered classics full-lengths like “In The Forest Of The Dreaming Dead” and “The Somberlain”, both were released in the same year of 1993. Although respected alike, UNANIMATED always remained buried in the shadows and swirls of DISSECTION. But those aware, they know the aura of UNANIMATED and its great influences upon its contemporaries and future generations. Along with the classic debut full length, their follow up full-lengths “Ancient God Of Evil” (1995) and “In The Light Of Darkness” (2009) all were blessed by the empowering and enchanting vocal deliveries by Mickael Broberg (1991 – 1996, 2007 – present). So, when I received the release and found out that this is a side project of Mickael Broberg from UNANIMATED, and this is their debut album “In The Darkest Of Times“, it sent a great sense of urge to explore this deeply. “In The Darkest Of Times“ will be released under the banner of Silent Watcher Records and all the songs were written, arranged and performed, and also produced / mixed by Mickael Broberg and mastered by the esteemed Dan Swanö (EDGE OF SANITY) in Unisound Studio. Indeed, a classic combination in the production department. The album contains one intro and seven songs of pure dark and melodic Black Metal, that can be said, made in Sweden. Although many underground Black Metal acts in modern times tend to dismiss the importance of production with too manufactured sounds, but “In The Darkest Of Times“ was captured with a sullen atmosphere to express contempt and agony, in an evil-natured sound. Here the emphasis is on the bass, which happens to be just as audible as the guitars. With such a balancing craft by Dan Swanö, the overall sound of the album has a much heavier and deeper tone. In fact, the bass seems to be the instrument carrying most of the riffs, while the guitars provide a melodic and menacing timbre. This formula causes the entire mood of the album to loom in a bleak state, but in no way does this album make you feel cold or hollow, but rather strangely snug and full. Like what happens when you listen to “Ancient God Of Evil” and “In The Forest Of The Dreaming Dead”. But here Mickael Broberg hasn’t sung like the being he was, but rather gasping for air and thrown away his inner demons in ‘The Black Flame’, ‘The Moonlight’s Bane’, ‘Shadows Under The Sun’ and the title track ‘In The Darkest Of Times’. Truly, here Mickael Broberg went through the darkest of times and for the fans of DISSECTION, UNANIMATED, VINTERLAND or LORD BELIAL, this release deserves some spins and a nod to Mickael Broberg. Find out more about the project and the label here: www.facebook.com/contemptofthelight, www.facebook.com/silentrecordswatcher.