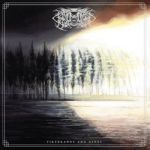 With CROM DUBH, we have a long running (since 2003) band from the UK that, despite their long presence in the scene, has a quite overseeable discography. Two demos, an EP and the album “Heimweh” from 2015, all of them up to now unknown to me. Now, four years later, the second album “Firebrands And Ashes” is here, again on Ván Records. And if this label releases an album, it usually is something special and unique. CROM DUBH are no exception, since they have a very original sound and style. Even though they are based in Black Metal, they added some truly British elements to their music. On the one hand, a lot of the harmonies and melodies sound very Celtic, not specifically Irish, more English in my ears. And on the other hand, the songs are often pretty epic in a way that reminds me of a blackened version of SOLSTICE. Of course CROM DUBH are far away from being a Doom Metal act, but the overall atmosphere often is more Epic Metal than Black Metal. In the long run of this very diversified album, the guitars are creeping more and more into the brain of the listener. Especially the epic ‘Last Dust’ and the long and winding ‘Ram In A Thicket’ are fine tunes that display the variety if the songs on “Firebrands And Ashes”. But the real highlights are on the second half of the album. The grooving drumming and the both epic and piercing guitars make ‘Burning’ an absolutely outstanding song and the final ‘Endless Night’ is a very unpredictable epic song that grew every time I listened to it. Unfortunately the, in my ears, weakest and most conventional song ‘Astride The Grave’ is placed between these two fantastic highlights. Yet this is complaining on a high level, since that tune is quite fine as well. So, to sum it up, CROM DUBH have released a damn fine album that needs time, yet it is worth this time. Visit the band at www.facebook.com/cromdubhmetal, and be sure to check their label as well: www.van-records.de