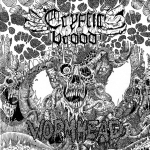 Wolfsburg in German Lower Saxony is by now mainly known for cars, faked exhaust values and a football club that is pretty successful, thanks to those cars… But there’s hope for the town. This hope is a young Death Metal three piece with the moniker CRYPTIC BROOD. The year 2013 saw not only the formation of the band, but also their first audible sign of rotten life, a demo called “Morbid Rite”. Last year, they teamed up with GRAVEYARD GHOUL to release a 12” EP together. And now, they are here again with a new EP called “Wormhead”, sounding pretty much like it is named. These four songs smell like the stench of decay and putrid guts. Musically and soundwise, CRYPTIC BROOD are deeply rooted in the early days of the Death Metal underground, with a sound that reminds of old demo tapes or 7”es released on obscure labels in the early 1990s. Bands like early GRAVE, AUTOPSY, PUNGENT STENCH or DIVINE EVE left their musical mark in the style of CRYPTIC BROOD. So, it’s no wonder that the opening ‘The Temple Of Pestilence’ already hits my nerve and the musical flow of lava ‘Gargling Vicious Mass’ is nothing less than perfectly named. With ‘Infecting The Brood’, we have an unconventional interpretation of an old SUFFOCATION classic, ennobled with a guitar solo by a mysterious guy called Don Promillo (I have an idea who this guy might be…). Finally, the title track even prowls in early Grindcore times, when this term implied not only hyper speed, but also a certain sound and special groove. Too sad this varied abscess of an EP is running only hardly 17 minutes. Well, there’s hope that a full length will be as perfectly rotten as “Wormhead”. Until then, you might get this version of the EP, it’s on Weedhunter, which means it’s a tape, made up very fine and strictly limited to 166 copies. If you want to find out more about CRYPTIC BROOD, go to http://crypticbrood.bandcamp.com or www.facebook.com/crypticbrood. And if you want to get the tape, visit: http://weed-hunter-records.blogspot.de 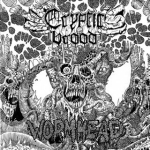 After a demo and a split release with landmates GRAVEYARD GHOUL this debut MCD on Xtreem Music is the next step of madness by those three Death Metal youngsters from Wolfsburg, Germany. Following their path you really recognize that constant live playing and working hard really helped them in growing further in their way of delivering filthy, raw and morbid Death Metal. These new tracks have more flow and more intensity; especially the balance between doom, groove and grinding brutality is working better and better. The whole recording is based on the principles of “What you hear is what you really get”, means a real and raw, almost rehearsal like sound. But it works bloody well with their style and it feels productionwise like listening to a very early MLP of the gods of gore AUTOPSY. As a special one for that release the boys did a slow doomed to death cover version of SUFFOCATION’s ‘Infecting The Crypts’; a nice idea by the way! As big references to the sound of CRYPTIC BROOD are in first line AUTOPSY followed by bands such as COFFINS, REPUKED, UNDERGANG and alikes, so if those belong to the faves in your Death Metal sewer then I’m sure you’ll like this MCD a lot. The artwork done by German Necromaniac Artworks hits the nail on the rotten head in delivering an authentic underground feeling to this release. Final conclusion: CRYPTIC BROOD are getting better and better and this release is a damned promising appetizer for a hopefully soon to be released debut album! Make sure to have them on your list when talking about new Death Metal from Germany! www.crypticbrood.de, www.facebook.com/crypticbrood, www.xtreemmusic.com