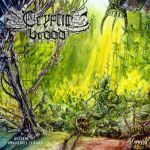 CRYPTIC BROOD are a bunch of sick fucks who seem to love raiding cemeteries all across Europe (and also Asia if I’m not mistaking) in order to being constantly ‘Mantled With The Stench Of Death’ which somehow enables them to come up with their sick and depraved “sinphonies” of death and decay. Imagine ‘Wading Through The Remains’ of rotten AUTOPSY carcasses with the level of filth turned up a whole lot more. It’s actually hard to imagine that this is possible but to be honest, CRYPTIC BROOD makes AUTOPSY look like a bunch of schoolboys who just exhumed their first corpse while this German three-piece already has built themselves an Ed Gein – like shrine of perversion. Don’t get me wrong, I am a huge fan of Chris and co. but “Outcome Of Obnoxious Science” is just that damn putrid, slimy, messy and horribly stinky. The songs on the record mostly mix into each other which makes it one big fat chunk of sickened songwriting that is so fucked up that one might think that it’s nothing but ‘Harrowing Hallucinations’ that are coming straight from the speakers. Imagine super slow moments which all of sudden become absurdly slow 2/3’s into the riff, blast beat explosions which merely last for the blink of an eye only to turn into punky passages which once again climax into a splendor of grinding insanity. Deep growls are taking turns with bone-shattering screams and vice versa and sometimes even attack the listener simultaneously which results in an absolutely ‘Ferocious Torment’. If you’re looking for verses, bridges or choruses go and listen to WHITESNAKE or buy yourself some overpriced tickets for next year’s ridiculously shitty MÖTLEY CRÜE “re-union”. CRYPTIC BROOD are a bunch of wild ones, not wild wannabes, and they prove it with every note on their new record, which is also equipped with a perfectly fitting production that features a very uniquely sounding bass guitar. In case you still haven’t figured out what I’m trying to say, here it is once again: support this hardworking bunch of ghouls as they release great music and play their asses off out on the road. They kill on record and they slay live – appreciate it and check out www.facebook.com/crypticbrood and / or www.war-anthem.de to get your cryptic fix.