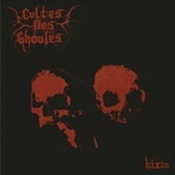 CULTES DES GHOULES burst onto the scene in 2006, with their well-reviewed “Angel Of Poison And Death” demo. Since then the band has annually reminded us of their existence with more demos, splits, and now finally a full length. “Haxan,” probably named for the 1922 silent movie classic, razors through the speakers in a filthy, low-fi snarling buzz. The primal aggression of songs such as ‘Scholomance’ and ‘Baptised By Baron’ indicate CULTES DES GHOULES draw their influences from the usual sources: BATHORY, HELLHAMMER, and so on. But CULTES are not afraid to slow it down and attack from a different angle. The songs on “Haxan” are long; one of them, ‘Impure Wedding’ clocks in at 16:00! This leaves the band more than enough room to effectively merge several songs into one. And so with a song like ‘Baptised By Baron’ we’re taken on a Metal roller coaster: a slow, steady build-up, to an explosion of speed, to an eerie silence interrupted by the lonely cries of an infant and sinister notes, then a weight of heavy riffs, and finally to a chorus of unearthly voices riding like the wind alongside the blasting drums. I greatly enjoyed this album and heartily recommend it for all fans of aggressive, teeth-gnashing Metal! More info at www.cultesdesgoules.org, www.hellsheadbangers.com