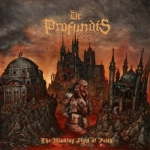 This English band formed way back in 2005 and started as a Doom Metal band… something that will not even pass through my mind after listening to this really killer disc of melodic Death Metal. Although the name recalls VADER (and their style is not that far away) the name was actually taken from a song of ABRUPTUM (and that is the only thing in relation to them). The style of the band reminds me of something between the savage melody of SINISTER, the brutal riffing of VADER and some technical and melodic touches of later era DEATH. Vocalist Craig uses a quite good variety of extreme vocals to keep things more interesting. The twin guitar attacks are just quite catchy and very Thrash orientated in the way the Bay Area bands used to do like early EXODUS or FORBIDDEN, yet this is without doubt Death Metal. Sometimes the style, will remind me of early DARK TRANQUILLITY and although there is also melody in here, the band is more ferocious in approach, yet never loosing control. Yes, I have heard some other bands in a similar style, yes, this is not earth-shattering, yet it is so well done, that Death Metal fans looking for finesse and brutality in one pack have no longer to look further. Fans of later era DEATH will be proud… as Chuck would be of his legacy left and these are some advanced followers. www.facebook.com/deprofundistheband, https://tometal.com