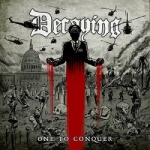 Epic War Death Metal can be described as a new genre, started and pavemented by the great BOLT THROWER and followed some years later by the supergroup HAIL OF BULLETS, of course you will mention SODOM whenever you are talking about war influenced Metal, and to that small amount of bands there’s a special room in the heavy heart of the people who likes their music about killing, weapons, tanks and conquer. First time I heard about this deadly squad was when Hellthrasher released DECAYING’s CD compilation back in 2011, it was indeed a strike of fresh air blowing upon piles of old school Death Metal trying to nail "Left Hand Path 2", so for me this Finnish youngsters were doing something different, something right… To be honest I skipped the band’s first 2 full lengths, not on purpose, but because it is almost impossible to follow up all the bands that were putting out splits, EPs, full lengths every 8-9 months. So as 2014 fell upon us I started (wanted) to be a bit more selective on the time I was using to listen to new records, and hand picked some of the bands I liked but missed their path for the last few years. And now with a 3rd album, this (once) young Finnish guys are still walking the road to war! What I can say about this album right from the start is that it feels unique, it doesn’t feel like the band is paying tribute to those iconic bands we just mentioned, DECAYING built something a bit more melodic, catchy and less groovy than what you might hear in a BOLT THROWER or HAIL OF BULLETS album. I’m still not liking the cover artwork and I do think it doesn’t do justice to the music trapped inside this CD, but that’s something we might see as a secondary thing, what’s relevant and powerful is the music. "One To Conquer" is not a great album on its own as it suffers from forgetable riffing parts and passages, but like I said, the idea is there, something original and different is there, so I’m sure this band will be going up step by step, and I’m already looking forward to a new record that could probably put them on the map for WWIII. In the meantime go grab some ammo at : www.facebook.com/pages/decaying/127897600587653, www.hellthrasher.com