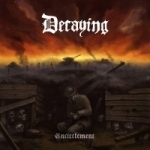 Old school – or no school at all, or what’s said about this topic once by a bunch of smart ass people? Anyways, the concept ‘old school’ is always a fine thing whenever it can be crystalized into the kind of musical form that moves you one way or the other. The Finnish Death Metal trio DECAYING, who has also released their debut 6-track studio record titled "Devastate" on Polish Hellthrasher Productions in 2011, has well realized about the whole concept about being old school – and cherishing musically that old school Death Metal theme in particular. DECAYING’s 2nd album, "Encirclement", offers basically that meat and potatoes thing in an exemplary way – like implying for everyone of us it’s far from ceased to exist. DECAYING’s Death Metal is presented basically a straightforward and simple way. It sounds heavy, brutal and downright raw – and has this tiny nostalgic element attached finely to it that harks back to the early 90s period of European Death Metal; to that one rewarding era when many classic Death Metal releases saw their birth, some goddamned friggin’ 20 years ago. A great thing about "Encirclement" is, it keeps reminding us of some of those jolly good Death Metal times over and over again – and not only because the band’s vocalist (also bassist and guitarist on this very record) Matias Nastolin happens to sound deceptively like a twin brother of Martin Van Drunen (that ASPHYX and HAIL OF BULLETS fame) but also because the guys clearly have all the understanding how things should be made in order to sound convincing and entertaining as far as all their song material on this second output of theirs is concerned. The DECAYING camp keeps the ol’ flame burning bright in the name of that nostalgic old school Euro-Death Metal style on "Encirclement" – and if that’s something you think is worth keeping a couple of torches high for too, then undoubtedly nothing stops you checking these guys out. A strong reek of decaying is drawing nearer and nearer… are you also smelling a bit of it in your nostrils already? www.myspace.com/decayingofficial, www.hellthrasher.com