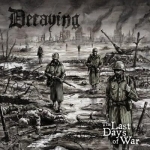 Heavy, such a heavy shit here. Finnish Death Metal commando known as DECAYING, started their world invasion just only 3 years ago, have been pretty darn active to arm their troops. "The Last Days Of War", is the band’s 3rd Death Metal bombardment already, following somewhat steadily the same war plan, which they started on the band’s debut album, titled "Devastate". However, only this time DECAYING’s troops are stronger and more prepared, to invade deeper into the inner lands, so to speak. DECAYING obviously cannot get enough of worshipping such old school sounding Death Metal heroes as ASPHYX, BOLT THROWER, HAIL OF BULLETS and the likes. And there’s really nothing wrong about that. A word ‘devastating’ would be fitting to use about DECAYING’s collection of war-themed songs on this new record but then again, words like ‘murderous’, ‘all-annihilating’, ‘punishing’, ‘dreadful’ and ‘destructive’ all fit to describe the band’s 3rd album very well as well. At times, it’s really kind of confusing to listen to this record because it indeed does remind of some certain, more established Death Metal names (like BOLT THROWER or HAIL OF BULLETS) – and when Matias’ input vocally brings Martin van Drunen to mind more than just momentarily, it surely doesn’t help you to become even more confused. But never mind if he sounds like that poor little brother of Martin’s; this is absolutely enjoyable Death Metal from start to finish – leaving guts, blood and bodies behind when rollin’ forward like a never-ending division of wrecking panzers. I can easily even subscribe the fact DECAYING have thrown their yet best record on our way. The songs are well crafted and have lots of sheer potential in them, in which a display of brutality, heaviness and old school Death Metal finesse, they all together come hand in hand in one beautiful package. And you know what? The war has just begun for DECAYING on "The Last Days…". More about DECAYING at www.facebook.com/decayingofficial, label: www.hellthrasher.com