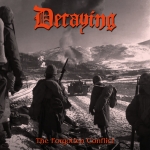 Finnish horde DECAYING are active since 2010 already and have released two demos, two EPs and three full-length albums in that time, so the guys seem to be very creative and active. I only stumbled over them when they released their album “One To Conquer” in 2014 which also was reviewed by us. The influences of bands like BOLT THROWER, ASPHYX and HAIL OF BULLETS are obvious, but they do not sound like a cheap copy of those bands. It is more that some lunatics came together to simply play the music they adore as all sounds really matured and professional. This compilation features re-recordings of three old tracks from their first demo release “New Order” as well as a track from their compilation “Devastate”. Normally I am not a friend of re-recordings from demo tracks as I like the raw spirit of demos but those recordings still capture the wild spirit of the underground but in a proper recording raiment. As mentioned before the band’s sound is heavily influenced by ASPHYX and BOLT THROWER but also some warmer Gothic / Death melodies in the vein of old PARADISE LOST or AMORPHIS can be located here and there, which gives their mixture of Doom and Death Metal a varying painting. The bands lyrics cover all topics around war and these topics are getting presented by cool grunts and some killer screams sounding like Martin van Drunen in his best days. The speed varies from uptempo and Thrash influenced tunes to slowed down Doom Metal with some really heavy and thick guitars, which are very heavy and well-produced. The songs have a good atmosphere and are pretty thought-out. The drumming is also very thick and delivers a solid fundament for their battle sound. The guys deliver some memorable melodies and good tracks, but are still a bit behind the mentioned influences. Anyway considering the development they made and comparing these tracks to their current stuff, the band has a lot of potential and is really worth to be checked and followed. The added live tracks capture the raw underground power and spread out some 90s magic and are also a proof for the quality of the band. This compilation is not only for the really die hard collectors but also a good starter to check the band out. It gets completed by a well-fitting war cover, definitely better than the one from their last album “One To Conquer”. For more info about the band, please check the following sites: www.facebook.com/pages/decaying/127897600587653, www.rawskullrecordz.bigcartel.com