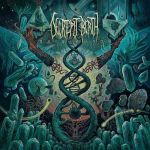 DECREPIT BIRTH rise after a 7 year slumber to issue out their return-to-form opus titled “Axis Mundi”. I lost track of this band right after their kick ass 2008 album “Diminishing Between Worlds”, but it looks like the band has not missed a beat. Yes, 7 years is a long grace period between albums and I don’t think anyone will be disappointed with this effort. In a year where acts like SUFFOCATION, DYING FETUS, IMMOLATION and ORIGIN all came out with new albums it’s nice to see that there is another contender entering the race for the year. If you are familiar with their past catalog then you should know what you are in for when checking out “Axis Mundi”. The album starts out with the track ‘Vortex Of Infinity – Axis Mundi’ which builds things up with some killer drumming (but then again when isn’t that the case with a Tech Death Metal band) and devastating guitars. Things really pick up speed with track 2, ‘Spirit Guide’, which has some really good guitar hooks / solos that really bring the song to life. Sean Martinez’s bass skills make their mark on the track ‘The Sacred Geometry’ and compliments Sam Paulicelli’s drumming through out the record. While listening to this album I got the feel of some “Human” / “Individual Thought Patterns” era DEATH in some parts of songs and that is a nice touch. One thing that really stands out on this release are the guitar solos and really extenuate each track (just take a gander at ‘Mirror Of Humanity’). Now let’s talk about the covers that appear on the record. DECREPIT BIRTH pay homage to SUFFOCATION, METALLICA and SEPULTURA with doing their covers of ‘Orion’, ‘Infecting The Crypts’ and ‘Desperate Cry’. Man, they really do an excellent job on all 3 covers too (the covers alone are worth picking up this record). The ex – Unique Leader Records squad have done a great job on this album. You can’t deny that these guys are one of the few bands that didn’t stray from the Tech Death Metal formula and are one of the few bands that continue to carry the flag. Nuclear Blast Records released the CD and digipak version (the 3 cover songs are only on the digipak version) while Agonia Records issued a limited edition box set of the album that comes with a patch and a few other goodies. Let’s hope they don’t wait another 7 years to unleash another beast of an album. For more information: www.facebook.com/decrepitbirth, www.agoniarecords.com