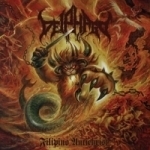 The return of utter filth and hate! The trinity known as DEIPHAGO continues its onslaught with the second full length entitled “Filipino Antichrist”. In terms of fury and aggression this new album can be seen as a direct continuation of “Satanik Eon” in the sense that the band didn’t lose any intensity at all, the brutalizing approach to chaotic and insane bestial Black / Death Metal remains unchanged, demonstrated by the first track ‘Christ Eater’ detonating from the speakers right after the intro (aptly titled ‘Annihilation’, edited from some dramatic, slightly atonal modern classical music presumably?). DEIPHAGO still deliver a scathing blast of violent noise crowned by the venomous, rabid commandments of V666, no question about that. In the course of the album, however, some nuances can be perceived on “Filipino Antichrist” which were not present on its predecessor, mainly the use of breaks and little fills in the percussion which adds a bit more dynamics – first time this can be noted in the first moments of ‘Articles Of Death’ and furthermore in the rest of the tracks. As already mentioned the vocal delivery on “Filipino Antichrist” is again top notch. The main vocals are vomited forth in almost hysterically possessed fashion, screamed breathlessly. Some very deep grunts are present as well, e.g. in ‘Satan, Semen And Blood’, high shrieks add to the demented atmosphere in some tracks also. ‘Subliminal Satan’, one of the stand out tracks for me, features the use of hissed whispers which sound indeed perverse.This time, even some spoken word samples are used but they are hard to make out amidst the storm. “Filipino Antichrist” also features a well-done coverversion, this time SARCOFAGO’s ‘Hate’. The title track itself is the most “untypical” as it starts with a semiaccoustic intro and takes some time to build up before audial hell is unleashed. In terms of musicianship, “Filipino Antichrist” is as direct, raw and dirty sounding as “Satanik Eon” – the leads played by Sidapa are purest atonal chaos but not sloppily played, rather the opposites, and add up perfectly to the demented and insane atmosphere of this record. Compared to “Satanik Eon” the production here is more balanced, giving enough room for Nazgul’s percussion barrages while the guitars could still profit from a bit more presence. On the other hand, a band like BLACK WITCHERY hardly has a clearer production and it works which is also the case here even though the two bands are quite different. DEIPHAGO don’t really sound like any other band, are hard to take but should be known to every devotee of perverted bestial Black / Death Metal. Granted, if “Satanik Eon” was already too much for you, this album certainly won’t change that, all others are invited to enter this “Storming Chaos”. Some final words about the really well-done packaging: the cover of “Filipino Antichrist” is graced by renditions of what I think is a mythical creature from Phillipine folk tales (similar to an Indian naga but I am not sure), done by two artists different from each other, either in full colour or gold and black ink. The album has been unleashed in various formats such as picture LP, regular LP, digipak as well as jewel case CD, accompanied by various other merch as hoods, shirts and even backpatches so head over to the Hell’s Headbangers page www.hellsheadbangers.com. Band contact: www.deiphago.com