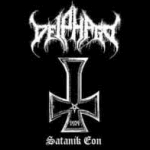 What a filthy blastridden assault this is! The name DEIPHAGO might ring a bell for those who are interested in the efforts of extreme bands from exotic or obscure countries. This unholy three piece originally hailed from the Phillipines where they released several demos in order to find and refine their sound. Now, the band relocated to Costa Rica, recoding their first full length. Now to this offering… the intro, aptly titled ‘Genocide’ is a dramatic classical overture treated with some electronic effects which leads into the first barrage ‘AngelRapeslay’ after one minute. As you may deduce from the title, there is no sophisticated and controlled standard Black Metal to be expected – this is pure untamed South East Asian War / Black / Death Metal aggression. First points of reference could be IMPIETY and also ABHORER, but whereas the first adopted many Death Metal influences and now sound much closer to acts like ANGEL CORPSE or MORBID ANGEL, DEIPHAGO stay more in the War / Black realm, BESTIAL WARLUST come to my mind for example. Other influences cited by the info are CONQUEROR and REVENGE which may also give you a good idea of the direction these “god-eaters” take. Other than these bands, though, DEIPHAGO use much higher vocals – not the usual Black Metal screeching but very psychotic ranting / screaming – perverted, frantic Thrash vocals. Sometimes the vocalists go for a demonic hissing not unlike some passages found in the works of BEHERIT. The production on “Satanik Eon” is appropriate as the album sounds like a metallic storm hurled at you. Maybe the guitars and drums could be a little bit more present in the mix, even though the whole production contributes to the bestial and chaotic atmosphere that dominates this album. On top of the mangled cover of HELLHAMMER’s ‘Eurynomos’, there is the welldone SARCOFAGO cover track ‘Desecration Of Virgin’ featured on LP the first 1000 CD pressing. The layout is rather simple in black and white, a “satanized” iron cross, some band pictures and quotations from Crowley’s Liber AL in red ink behind the CD. Friends of clear productions, progressive arrangements and advanced musicianship will absolutely detest this album, worshippers of cruel War Metal will welcome a new horde and join the “Satanist’s War” and proclaim “Death To Everything”. deiphago.cjb.net/ Label: www.morbidmoonrecords.com