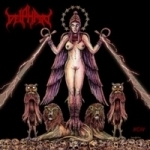 Already released in 2011 and featuring the same line-up that recorded 2009’s “Filipino Antichrist”, DEIPHAGO offer a 7” with the re-recording of a demo originally from 1993 titled “XCIII”. After the short ‘Intro: Damnation’ which sounds like a speech of Aleister Crowley played backwards, ‘Backmask Prayer’, begins with a slow rumbling bass line and a slightly off-sounding guitar lead / tapping before the blasting onslaught begins. Clocking in at roughly six minutes, slowing down in the middle section and at the end for some atonal lead guitar playing, this track can almost be called epic for DEIPHAGO standards, structured somewhat differently from the material from both albums.The vocals here are treated with a very heavy echo effect. ‘Hail Mary Inanna’ on side B starts fast right away before immediately coming to a break and a slight bit of melody, not unlike the parts in the title track of “Filipino Antichrist”. The change between melody and brutality is present throughout the whole song. This track features slightly more screamed vocals as well as whispers reminiscent of BEHERIT. Just as the previous track it is about six minutes long. It may be just me but there seems to be a slightly stronger Death Metal spirit in terms of songwriting here which is no wonder considering their age and the then-different line-up. How much the re-recordings differ from the original reditions is hard to judge but in general the tracks of these “Demo 1993 desecratrions re-recorded” (as mentioned on the insert) are a good addition to the collection of DEIPHAGO fiends and fans of very chaotic and dirty Death / Black Metal as e.g. BESTIAL SUMMONING, offering a bit of a different edge compared to their albums on which the average track length is just under three minutes. In terms of layout Headbangers did a great job on this one once again. The cover features a coloured drawing of an ancient relief of the goddess Inanna, done by Chris Moyen, band logo and title are stamped in metallic red foil. The printed insert features the same drawing in black and white, lyrics, zine excerpts and live pictures of the band dating from 1993. Even though “XCIII” is sold out at Hells Headbangers for quite some time already (sorry for the delay!), copies can still be found in several other distros around the world. www.deiphago.webs.com