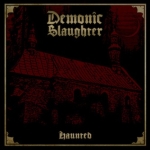 Poland’s hellish horde DEMONIC SLAUGHTER have released their fifth output "Haunted" late last year via Poland’s leading Black Metal address Pagan Records. Maybe the dark and rainy weather made my entrance to their music a bit easier, but their raw yet melodic Black Metal is not bad at all. The foundation of their sound is raw and grim Black Metal, which has its origin in older Norwegian releases of the early 90s. DARKTHRONE, MAYHEM and GORGOROTH can surely be named as references, but their Black Metal is not as raw as the for example older BEHEMOTH was. Their grim and freezing Black Metal is accompanied by a very melodic lead guitar, showing influences of the more melodic Black / Death Metal hybrid of the Swedish scene back in the 90s. The rhythm guitar is delivering the raw and dirty basis. The vocals are grim and evil, with some slight effects from time to time. The drumming is precise and fast, not only blasting, and when they reduce the speed it fits good into their sound. Keyboards with choruses and thunderclaps and some more effects, give some more variety to their sound. The first four songs are quite strong in my opinion, but then they start to lack inideas a bit and the remaining songs sound a bit similar. Productionwise, all is in order. They have a proper and well-fitting sound, with a good production and a 90s typical Black Metal cover artwork. In general, their style changing between Norway and Sweden is quite fine and fans of melodic, freezing Black Metal should give this output a listen. More info can be found at the following locations: http://demonicslaughter.bandcamp.com, www.pagan-records.com