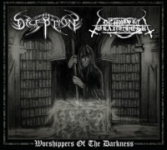 One more Polish assault of evilness and brutality hit my household – not coming through my living room’s window but a thick concrete wall. Nah, you should know that I am just kidding here. Anyways, one of the latest products that have been unleashed from the headquarter of Polish extreme music label, Hellthrasher Productions, is this split-CD of DECEPTION and DEMONIC SLAUGHTER, both bands enjoying a decent attention among the underground extreme Metal fanatics. Mielec-based DECEPTION have a longer history (also recording-wise) out of these two particular Polish Black / Death acts in question. The band was already formed in 1998 Anno Bastardi, and during the band’s whole history, they have gone through several line-up changes. Why, one may ask? To find that one solid and professional line-up once and for all, that could shred so much that people would start talking about one of the most potential Polish Death Metal act, next to bands like VADER or DECAPITATED, perhaps? In theory, that could be even possible but then they really should break themselves through the hearts of more established, major labels like Earache or Century Media or whatever. DECEPTION have that potential – definitely. They blast forward all cylinders firing up hotly, reminding me of Brazilian KRISIUN here and there in some peculiar way. Oh, and that BATHORY cover song, ‘Rite Of Darkness’, also should give a wide grin to Mr. Quorthon on the other side. Polish Black (/ Death) Metal warhorses DEMONIC SLAUGHTER, on the other hand, keep their colors pitch-black the same way as they already did on the band’s 7-track "Dark Essence" EP, that was released in March this year. The production has been improved a lot on their part of this split-CD thing compared to the EP; the 2 songs that they have exclusively recorded for the split, don’t suffer from any rehearsal standard sounding effect anymore, which if of course a good thing. As for the songs, well, nothing new or unheard in here under a storming, darkened sky but DEMONIC SLAUGHTER’s kick-ass sector still seems to do a few welcomed tricks for the advantage of the band. ‘Hooded Reaper’ is a better song out of these cuts they have recorded for the EP – kind of a spooky, slightly experimental but still an all-out Black Metal assault that you shouldn’t play for your toothless, sweetbread-smelling grandmother at the Shit-mas Eve (unless you don’t want to ruin her night completely). The Polish extreme Metal hordes – they are always out there for new blood, so you’d better watch out your steps. Band webpages: www.myspace.com/deception667, www.myspace.com/demonicslaughter, label: www.hellthrasher.com