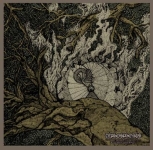 Looking back to 2014, this record belongs in my top three albums of the year. DEPHOSPHORUS from Greece is a so-called blackened Death  / Grindcore three piece, which is able to redefine that utterly stale label that I just used for them. What you have here is superior to all those bands which were labeled that way over last years. The sound on “Ravenous Solemnity” is something special and, for me, in many ways just brilliant. It leaves enough space for all instruments while still creating a massive, violent product. There is a technical but raw sound, a complex riff structure, a lot of atmosphere, and very poetic songwriting by Thanos Mantas. All of this unfolds in short and heavy three to five minute songs. Lyrically, it’s all about dark dimensions, and escaping galaxies or the fabric of the universe. Everything seems to be of an even level, but still has its own distinct space. For those who are into drumming, here you will find a masterpiece of drum massacre played by John Votsis, aka "Maelstrom“, who is also involved in acts such as RAVENCULT, THOU ART LORD, CROSS DENIED and SLAUGHTERD PRIEST, just to name a few. For me, he is one of THE ubiquitous stars in the Greek underground. This doesn’t mean I am not raising my cup to their older and more Crust Punk style records like "Night Sky Transform“ or "Axiom“ too, but it seems like changing the drummer has transformed the sound to a still very raw, but so much more technically brilliant, rampaging beast. The production managed to avoid producing horrible technically overproduced waste-of-time trash, but gives you the feeling of being right next to the stage experiencing the brutality of an out-of-control Greek riot. Led by the screeching voice of Panos Agoros, the vocals lie somewhere between hopeless yearning and a call to arms. A few songs which are examples for the masterful dynamics of “Ravenous Solemnity” are ‘Reversed Into Contraction’ and ‘There Is A Color’. I strongly recommend you to get this record, quit your job and start your own personal warfare against Jupiter and industrially-canned Metal while listing to this. And if you get the digital version, you will also find a cover track, which isn’t just a perfect addition, but a disturbing reminder that blood still runs red. Be prepared for the upcoming “Collaboration LP” split with HAAPOJA. More info: www.dephosphorus.com, www.facebook.com/pages/dephosphorus/127712980613396, www.7degrees-records.de