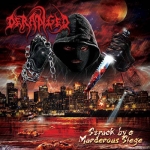 After three years of silence Malmö’s mangling mass murder machine is finally back with a vengeance! Honestly spoken, I someday left their trace and somehow my interest in the band after their self-titled album around 2001. So, just a short period of 15 years later I am sitting in my room, listening to their already 9th full-length. And well, I never really expected such a strong release. Right away from the start you’ll quickly recognize, that this could only be DERANGED because in my opinion no one else plays that sort of blasts and drums in general, like the only remaining founding member Rikard Wermén does! So good to hear that some things never change. Ok, I was kinda skeptical if that band still works without the crazy craftmanship of Johan Axelsson who has been responsible for all the sick guitar madness until 2008, but then decided to quit . And what else can I say? It really works! Thomas Ahlgren is able to keep up the morbid songwriting and spice it up with his very own special note. In other words: DERANGED anno 2016 comes up with the most versatile album in the band’s whole discography. Besides the usual blasting and shredding we all got used to, those guys incorporate way more mid-tempo parts than ever, which gives way for even more brutality in my humble opinion. The fourth track ‘Shivers Down Your Broken Spine’ is such a mean fucker and that even without a single blast or up tempo included. A song latter MORBID ANGEL would have never been able to compose, just in the tradition of, for example, ‘Where The Slime Live’. Even in ‘Toy Box Torture Chamber’, the spirit of Floridian angels is quite present. Well, as I already mentioned, I did not listen to any of the releases, the Swedish sickos put out in the past years, so I’m not sure if this has happened for the first time; but in the third track ‘Reverent Decomposition’ you’ll be able to witness some kind of melodies, strange backing vocals and sort of a groove, that I never ever expected from a brutal act like DERANGED. Don’t be afraid and calm down! "Struck By A Murderous Siege" is still riddled with all the trademarks, every fan of brutal Death Metal is craving for, so there’s no need to abstain. Even good old Berno Paulsson of mighty Berno Studio has been recruited once again after a small adultery for their last EP "Morgue Orgy". And this dude still knows how to put all in its place to get a warm, not too modern and very powerful sound, that provides the whole album with an extra portion of steam in the boiler. Kudos also to artist Mike Hrubovcak (better known as vocalist for bands like VILE and MONSTROSITY), who managed to perfectly realise the band’s vision of a front cover that spreads discomfort and expresses the brutal musical content, without that guts and gore stuff. Well, I already pointed out some of my personal faves off that album, but there are absolutely no weak songs to be tracked down. My personal bottom line concerning "Struck By A Murderous Siege": this is by far the most varied release in the history of Malmö’s most brutal band and I dare to say even the best one since their highly acclaimed "High On Blood". We can only hope that the current line-up is gonna be a bit more stable by now and will last for some more releases. Everyone and I really mean everyone into brutal Death Metal has to check out this relentless aural massacre and there is no excuse not to do so! This is the real deal! Contact their label to get yourself a copy, whether it is analog or digital. I prefer to obtain the album on vinyl since Agonia Records always comes up with some nice and worthy editions. www.facebook.com/derangedband, www.agoniarecords.com