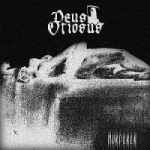 DEUS OTIOSUS
Murderer
(F.D.A. Records)
41:15min
A band that includes 3 former members of VICTIMIZER, might as well give an indication of the style of this Danish band. And I was expecting another old school Deathrash band, but instead we are faced with an old school Death Metal band which recalls in spirit and essence the sound of the old Dutch Death Metal scene, which may I remind you, was more or less rooted in doomy passages with some short brutal in your face speed, which is for example the legacy that ASPHYX carries on. And whilst this is in any way original or perfectly produced, it is the kind of music and production I enjoy, as it sounds totally like an old demo from the 90s resurrected 20 years later. Of course you will find references to the aforementioned Van Drunen led band, but also to OBITUARY, BOLT THROWER, early MORBID ANGEL, CELTIC FROST and even some old SODOM with less emphasis on speed and more in the groove of the songs, without falling in any core infected region. ‘Wall Of Violence’ is a prime example of how old skull (not school!) should be executed, and also proves that you can be very heavy and brutal at the same time. And the vocals are also a part I enjoyed a lot, they do sound cavernous, but never falls into the cookie monster, ultra-downtuned gargled noise. And also I can sense some subtle touches of blackened Metal, alongside the lines of early DISSECTION and some early EMPEROR, yet always maintaining their style of brutal Death Metal with that distinct Dutch flavor that to me seemed lost in the fantastic demos that were done in that place in the 90s. I must remind you that I am usually attracted by the faster spectrum of Death, yet in this case, I am more than convinced that the mid-tempo speed that DEUS OTIOSUS usually plays fits perfect into their essence. Now, after a rebirth of the Death Metal sound of antique which is dominated by the bands reanimating the Swedish essence, it was about time someone invoked the spirit of once such greats bands like DEAD END, CASTLE, PHLEBOTOMIZED to prove that Dutch Death Metal is a beast to be awaken and that can give such magnificent fights. Truly a great release, that can take you unto a travel of greater ages bygone but never forgotten. www.myspace.com/deusotiosus, www.fda-records.com
Julián “Deus” Núñez