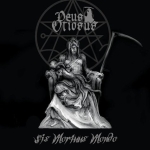 Them Danes DEUS OTIOSUS are back again. The year 2015 saw them enter the studio to record two new songs. Once more the five piece shows how very close Death and Thrash Metal can be connected. Thus the two new songs ‘Greater Horror’ and ‘Seperatio Leprosorum’ can be seen as the essence of the band’s previous works. It’s the combination of Thrash drumming, riffs somewhere in between and vocals in a not too growling Death Metal style that makes DEUS OTIOSUS something special in the contemporary extreme Metal scene. Add some Thrash styled guitar leads and solos and expect an inferno. Asides from a digital release, the two songs of “Sis Mortuus Mondo” are available on CD from the stirring label Godeater Records. But the CD features some more stuff as well, making it a full length. As a “bonus”, we find the whole DEUS OTIOSUS album “Murderer”, the first strike of the band that’s been out of print for a while now. This album already showed the way DEUS OTIOSUS took on the following releases. More based in classic Death Metal, “Murderer” already had a lot of influences from Thrash Metal, especially in the guitar riffs. Take ‘Ye Little Pigs Of Faith’ as a good example for this. And even though the songs of “Murderer” aren’t on the high level of “Sis Mortuus Mondo”, they’re still worthwhile thrashing Death Metal. But the two new songs alone are worth to get checked out anyway. The digital version is available here. For more DEUS OTIOSUS information check out www.facebook.com/deusotiosus.dk or www.deus-otiosus.com. For the CD, visit www.facebook.com/godeaterrec