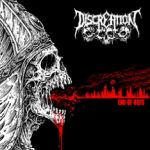 There are plenty of bands that make mistakes on their albums. From unnecessary voice or movie samples to acoustic interludes to experimental noodling to longwinded songs… any of these can ruin an album. And DISCREATION’s "End Of Days" has none of this. And thank god for that. Here’s a band that understands what Metal listeners want… pure uncompromising, straightforward asskicking Death Metal that never lets up or strays from its path from beginning to end. Marco Reitz (vocals), Sebastian Schilling and David Hubsch (guitars), Peter Frick (bass) and Martin Engels (drums) are a band to be reckoned with. Their fifth full-length begins with ‘End Of Days’, a furious roar of aggressive guitars, blasting drumming and throat-ripping vocals, setting the stage for a very consistent album of Death Metal mastery. ‘The Blood Mill’ is a swaggering beast of a song, filled with a buildup of guitars belching forth an army of putrid chaos. ‘Dark Possession’ is a galloping miasma of swarming hordes of demonic annihilation. DISCREATION bombards us continuously with their Death Metal magic… not necessarily creating anything new, but doing it better than most. ‘Let’s Watch The World Burn’ begins the first half of the track at a mid-tempo pace before smothering us with a crunching, shattering, fast-paced masterpiece. ‘El Magico’ throttles the listener with more angst-ridden attitude while ‘Invisible Front’ provides a steady, rib-cracking display of power. The ending tracks ‘The Pentagram’ and Where All Hope Has Been Silenced’ wrap the album up nicely. Enough cannot be said for this album. "End Of Days" consistently whips the flesh from our bones without letting up. Every single track is solid. In a genre that can be outstanding in one aspect and disappointing in another, DISCREATION are in the former level of Death Metal. Hail DISCREATION and the fiery battlehorse they rode in on! For more information, check out www.facebook.com/discreation, www.fda-records.com