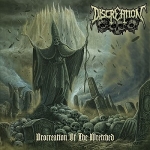 German Death Metal act DISCREATION passed me by in their rather long existence. Until they crossed my way during my visits on Facebook. A great cover artwork by Juanjo Castellano plus the fact that they’re signed to F.D.A. Records now wetted my appetite, since Rico’s taste in music is very often in accord with mine. So I checked them out, just to find out that the German five-piece already released three albums and three EPs in their nearly fifteen years of existence. But on the halfway to reach this day, the Hessians changed their style from melodic Death to a much more brutal and raw approach to the Metal of Death, without neglecting the melodies for sure. Especially their last two offerings, the album “The Silence Of The Gods” and the free three track EP “Plague And Fire” were real fine stuff, a balanced blend of Death Metal of the European school with elements of US Death Metal. Now DISCREATION unleashed a new album, “Procreation Of The Wretched”. And this album must be seen as the highlight in the history of the band. Simply because it is not just a bonfire of riffs, but also a bonfire of ideas that are weird on the first look, but fit into the songs in a special way. The opening ‘Planetary Punishment’ starts off pretty classical, in terms of Death Metal. Yet this one is a fine orgy of riffs and melodies, packed into a fine Death Metal tune with a solo part that reminds of early 1980s Metal. Next up is ‘Descending To Abysmal Darkness’, a song with a lot of fine and heavy Doom parts. A very classic blasting Death Metal intro part kicks off ‘Megacorpse’, nearly smashing CANNIBAL CORPSE to dust, but in the end the song builds the bridge to the more melodic past of DISCREATION. Maybe the title track turns out to be the most “ordinary” Death Metal song on “Procreation Of The Wretched”, but again we have Death with class here, to use a modified term of the past. ‘The Hunter’ is slightly pale in the beginning, but this one escalates towards the end with furious guitar parts. And then it is time to bring some more fresh ideas to the sound of the band: ‘To Cosmic Shores’ surprises with a Hardrock styled solo part with even some distorted slide guitars, while the intro part of ‘Corporate Hatred’ is a kick-start into the 1990s, when Death Metal bands experimented with modern elements. But it’s just the intro, do not fear! The song itself is finest Death Metal, again with class. Similar odd ideas can be found in the middle part of ‘Decapitation Marathon’, where we find some industrial samples. All these non-Death Metal elements are used here in compatible doses, of course, it’s just that DISCREATION aren’t a pure true-to-the-bone Death Metal band. After these excursions, the straight forward ‘Your Good Shelter’ is quite a surprise, even though this one is based on elements of Death Thrash in the vein of bands like SOLSTICE. Even though, or maybe just because it is not too unusual, the final ‘Dead Certainties’ turned out to be my personal fave on “Procreation Of The Wretched”. A pretty mid-tempo based song with double bass drums and a hint of BOLT THROWER, spiced with an even catchy refrain might be just my speed. The fresh, natural sound of “Procreation Of The Wretched” pleases the songs in a perfect way, so it is time to visit the band at www.discreation.de (where you can still get the “Plague And Fire” EP for free) and www.facebook.com/discreation, or to check the label’s site, of course: www.fda-records.com