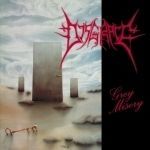 Once again, it is time to dig a bit in the dirty rotten past. This time we go back to Finland. In the early 90s, Finland had a pretty active undergound scene. FUNEBRE, XYSMA, CONVULSE and the short-lived ABHORRENCE, who later lead into the better known AMORPHIS, were some pretty promising youngsters, spreading a disease called Death Metal. One of those young promising newcomers was a band called DISGRACE, that was far ahead of their time. They released three demos in total before their debut "Grey Misery" which got released in 1992 on a small label called Modern Primitive. The guys from Turku had a already matured style back in 1992. Somewhere between CARCASS and the later well-known style called Death’n’Roll the guys played their rocking Death Metal. Looking back on the album today, the tracks were very groovy enriched by good ideas and the CARCASS touch fitted pretty well into their sound. The song structures were a bit chaotic here and there but all in all this debut album was a really good starter and I am sure on another label it would have received more attention, but in ’92 other bands were already some steps further in their development than DISGRACE were. Poor advertising and a horrible CD-package with an ugly coloured cover made it impossible for them to succeed. The production was quite good but still underground enough not to sound too polished. The guitar and drum work still is pretty good and considering the age of the material, it is still a lot more fun to listen to this stuff than most of the polished and pro-styled Death Metal stuff which is around nowadays. The guttural grunts still are really kicking ass and fitted very well to the cool tracks. Sure, most of the material was CARCASS – painted but they started developing their own ideas and musical skills and maybe also influenced CONVULSE to go into a more Death’n’Roll direction later. On a second disc Svart Records also added their two demos from 1990 ("Beyond The Immortalized Existence" and "Inside The Labyrinth Of Depression"), the four tracks of their 7" EP "Debts Of God" (which was released by mighty Seraphic Decay Records) plus the two previously unreleased cover songs ‘Foxy Lady’ (JIMI HENDRIX) and ‘The Day Man Lost’ (CARNAGE). This material is far rawer then the stuff on their debut but also shows the huge development the band went through in a short time as their older stuff was more influenced by the classic Swedish stuff, similar to the first releases from Norway from that period. The cover is still not beautiful but this package by Svart Records really brings value for money and reminds us of a long forgotten little treasure. Everybody into old stuff, who does not own the old release or the 2018 version by Xtreem Music should grab this re-release. For all further information, check www.facebook.com/disgrace-138337632850666 or www.svartrecords.com