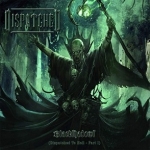 DISPATCHED was a pretty unknown band from Sweden, who also drowned in the mass of releases back in the mid 90s. After releasing four demos, they finally got signed to underground label Exhumed Productions and started the recordings for their debut album "Blackshadows", which unfortunately never really got released apart from some pressed promo tapes, due to financial issues of Exhumed Productions. Even though Metal Archives state, that the band plays blackend Death Metal, the 15 tracks of their first album "Blackshadows" clearly are influenced by the Doom / Death movement of the early 90s. Basis of their sound is slow Swedish Death Metal, complemented with the famous Doom sounds of the 90s. From time to time they remind me of CEMETARY during their fine "Godless Beauty" era, but also bands like early TIAMAT or GODGORY come into my mind. Surely their material is not mind blowing or invented anything new back in the days, but "Blackshadows" offers some decent tunes. Apart from the typical low-tuned lead guitars with melodic leads and the genre typical grunts, the band added some fine keyboards and violins into their sound and considering the fact, that this was their first real output, the genre mix all in all worked out pretty well and could have been a bit more successful back in the days. The material is not bad and reminds of the earlier steps of the above mentioned bands, or even a bit of MOONSPELL, during the "Wolfheart" era. GS Productions from Russia is focused on making some lost albums available again on CD and they also picked up the complete band history of DISPATCHED and released this in 2 lots in digipak format for a really fair price. Also they have added the rough tracks of their "Demo 1992", which shows the huge development of the band between this demo and the first output. Also they added the two tracks of their "Promo 1993". These two tracks are closer to the material of the first album. After these releases, the band tried to change their style and seem to have struggled to find the right sound for the band. This second era can be checked on the second version of their discography "Blackshadows – (Dispatched To Hell – Part II)", also released via GS-Productions and reviewed seperately on our page. If the mentioned genre matches your taste, check the bands first musical steps out and order the limited CD (100 numbered copies) here: www.gsp-music.com