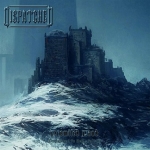 The moniker DISPATCHED is one I’ve read about (review) ages ago without ever hearing a single track from. I can’t blame the band because they have a decent discography with six demos, four EPs, a single and three full-length albums. These are ”Blackshadows” form 1994, ”Motherwar” from 2000 and ”Terrorizer (The Last Chapter…)” from 2003. Last year GS Productions released the first part of this compilation (limited to 100 numbered digipak CDs), covering the ”Blackshadows” album and the demos ”Dispatched Into External” (1992) and the two-song demo ”Act Of Resurrection” (1993). This second edition of the compilation ”Promised Land​ – ​Dispatched To Hell Part II" covers the ”Promised Land” (EP 1998), ”Returned To Your Mind” (EP 1997), the Promo 2 (1993) and three unknown tracks (again limited to 100 copies only). DISPATCHED mixes a few genres that seem unmixable and the result doesn’t really convince in terms of quality. It turned out to be pretty boring with a few better tracks or moments. All releases pretty much follow the same pattern with the ”Promised Land” being melodic Folk / Death with Black Metal vocals pretty similar to those of ENTHRONED (Belgium) and are the brutal aspect in their music. The riffs occasionally give things a folky twist. And a moment later I’d swear it’s Speed Metal. Many keyboards are used for probably creating a mystical atmosphere, but, like the bass, they cut off some sharp edges. And like the riffs they show the many faces of the band shifting between styles. ”Returned To Your Mind” being the same with different vocals. ”Promo 2” which starts promising and has the best production but turns out to be boring and pretty much the same over four tracks. Listening to this and especially the promo, you’ll hear traces of TIAMAT and SAMAEL. But for the rest this band tries to do their own thing which is brave. And they succeed partly because the melancholic almost gothic atmosphere is interesting and something that will certainly attract people. So, check and decide for yourself if it grips you. Be sure to avoid the track ‘Cyber Tech’ because nobody is waiting for this one! www.gsp-music.com