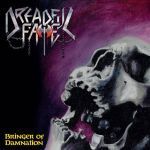 DREADFUL FATE
Bringer Of Damnation
(I Hate Records / To The Death Records)
21:57min

DREADFUL FATE is by far the best Death / Thrash band in recent years and their debut full-length “Vengeance” is a record every self-proclaimed headbanger should own, if you don’t, rethink your existence. It’s as simple as that. Consisting of members and ex-members of renowned bands like DESTRÖYER 666, MERCILESS, HYPNOSIA and INTERMENT, DREADFUL FATE always put the pedal to the metal and delivered ripping fast riffs and skull-pounding Lombardo-ish drum-patterns exclusively. The only bad thing about this band is that they recently called it quits and split up. Only the good die young. However, while the band broke up, they still managed to release one more EP with two new songs, a MERCILESS cover (off of their first demo), and two live tracks. While I’m not going to put a lot of focus on the excellent life material (go and buy “Vengeance”!) and the great cover track (you should be familiar with anything MERCILESS put out anyways), it’s the two new songs that are the most interesting part of “Bringer Of Damnation”. The mysteriously entitled opener ‘De Vermis Mysteriis’ is in my opinion the best song the band has ever written. As an absolutely brilliant homage to SLAYER around 1985 and 1988, the song starts off with ‘Hell Awaits’ like riffing, which delivers the perfect amount of aggression as well as catchiness (especially in the chorus). The highlight of the song is the “Reign In Blood” and “South Of Heaven” inspired middle part consisting of evily harmonized melodies à la Hanneman / King, which culminate in one hell of a mid-tempo riffage. Definitely my kinda thing, too bad there’s not a whole lot of bands out there doing it. The other new track, entitled ‘Unearthly Vision’, is a completely different beast and displays the diversity of DREADFUL FATE. No SLAYER moments to be found here, but instead we get to hear some epic and almost BATHORY – esque parts which are a new thing when it comes to DREADFUL FATE’s repertoire of torture. As with the opener, ‘Unearthly Visions’ opens with a fast, but more primitive, riff followed by another very catchy chorus. The middle-part delivers the BATHORY worship which won’t go away until the song is through. What a great band, what a great EP. Thank you for the music, as you Swedes say. Now for all you posers out there – www.facebook.com/dreadfulfate, www.ihate.se, www.tothedeath.se.