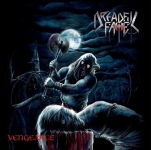 DREADFUL FATE features ex – members of two of Sweden’s best known Death / Thrash exports, namely bass player "Total Destruction" (who is the ex – bassist for the mighty MERCILESS) and vocalist "Bestial" (who also screamed his lungs out in HYPNOSIA), who are joined in this conspiracy with Satan by guitar ghoul "Death Ripper" (who is involved with old skull Death Metallers INTERMENT amongst other notable names in the Swedish scene) and drum demon "Corpse Skelethor" (who is currently also pounding skins in IN AETERNUM and has been involved in DESTROYER 666 among other bands). They have unleashed a rabid snarling beast of a debut album full of raging and ripping riffs that cut through the mix like a freshly sharpened scythe, devastatingly destructive drumming that is propelled along by rapid fire double kick, bestial bulldozing bass and harsh screamed caustic vocals that sound blisteringly fierce and feral viciously spitting out lyrics like a man possessed. Each song is a total thrashing throwback to 80s SLAYER, KREATOR, DARK ANGEL, POSSESSED and the likes as well as bringing to mind the classic MERCILESS albums. DREADFUL FATE plough the same narrow musical furrow as those fellow furious Swedes and this could in fact be released under the MERCILESS moniker and no one would question it, such are the striking similarities between both bands. The band know how to write a maliciously memorable song and there’s plenty to keep the listener hooked for the duration. It’s full throttle all the way with hardly any let up on the fast paced tempos but when they slow down briefly in parts it is to great effect and is skullcrushing. If you like your Thrash Metal on the more aggressive side of the genre full of darkness and death, covered in spikes, chains, bulletbelts and that is firmly in league with Satan (which is very clear with songtitles such as ‘Unholy Lust’, ‘Eternal Fire’, ‘Altar Of Cruelty’ or ‘Witches Hammer’) then you should check out this album. "Vengeance" unleashes 666% PURE EXTREME AGGRESSION! If you are a false don’t entry as you will feel the wrath of the blade and suffer a dreadful fate!! THRASH ‘TIL FUCKIN’ DEATH! www.facebook.com/dreadfulfate, www.ihate.se, www.tothedeath.se