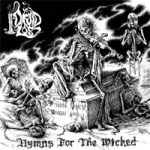 When I got informed about the existence of this group I became very excited. The reasons are very simple: the line-up and the music, that this trio offer us. Born from the swamp pits of Florida, DRUID LORD was formed in the early months of 2010. Pete Slate of cult Black / Death band EQUINOX (also ex – ACHERON / KAULDRON / ex – INCUBUS) formed the band with former EQUINOX drummer Stephen Spillers to create only heavy Doom / old school Death Metal. Tony Blakk who previously worked with APOSTASY, ACHERON, EQUINOX, DIABOLIC, has also joined the coven of Druids on vocals / bass. I’d say, the music hasn’t to do with the bands that the musicians are or were involved in, it’s Death / Doom in a old school, primitive way. It’s obvious, that the band’s influences are masters, such as ASPHYX, HELLHAMMER, AUTOPSY or ‘Covenant’ era MORBID ANGEL. All of the tracks are written in the same doomy way, they’ve got a morbid, grotesque atmosphere (mood), thanks to Tony Blakk’s growls and the horror based lyrics. There aren’t hellish fast blastbeats or Gothic elements, Black Metal touches, only crushing riffs, audible bass and good drumwork. I wouldn’t name the record varied either, but this ain’t music, that needs so much variety. Sometimes I feel similarities to New York based cult act WINTER. Pete Slate delivers a lot of good solos, that are melodic and fit to the music well. I wouldn’t pick up any song to demonstrate the music, since all of them are very well performed, slow, pure Death / Doom ones. Among the tracks is a short, instrumental titled ‘Eerie Ways’, while ‘Gorgon Witch’ sounds like a track of a second wave, ’90s Swedish or Finnish Death Metal outfit. The cream on the cake is the awesome front and back cover art, that was drawn by Horror / Gore artist Putrid (HOODED MENACE, NUNSLAUGHTER, CARDIAC ARREST). Further info, that there will also be a LP version on Witches’ Tone Records, strictly limited to 500 copies and a track for an upcoming split 7″ EP with the band WOODEN STAKE is currently also in the works. DRUID LORD made a strong debut effort that fans of old school Doom / Death won’t disappoint. www.myspace.com/druidlordz, www.horrorpaingoredeath.tk