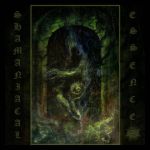 ECFERUS is a single-person Black Metal act from the United States. In a span of two years, ECFERUS managed to release two full-length albums, a trio of EPs, and splits with acts such as SEA WITCH, PALACE OF WORMS and JUTE GYTE. Released independently on digital format in late 2016, the “Shamaniacal Essence” EP is now a physical compact disc release courtesy of an early 2017 reissue from Hellthrasher Productions. Solo bands, regardless of whatever variety of Heavy Metal they’re undertaking, have a very high rate of subpar releases or general musical failures. While there are flashes of brilliance in this category, one with a rich history of excellent songwriters and composers, there are obvious and extreme numbers of acts or projects that pump out lackluster material in regular intervals. Solo musicians who can play a variety of instruments is not an uncommon thing, however, having an above average skill level across numerous instruments is. Often, the remedies designed to compensate for a lack of skill or resources typically do more harm than good. Drum machines, heavy post-production effects, and sterilized, granulated digital recording unintendedly become central factors in determining the quality of the record. Alp, the central figure behind ECFERUS, manages to navigate through the obstacles and stress of a solo record, displaying “Shamaniacal Essence” as a modernized interpretation of the older strains of atmospheric or progressive Black Metal working in conjunction with a tonal palette of mid-tempo Death Metal. “Shamaniacal Essence” suggests demo-era HADES / HADES ALMIGHTY, the strange tension of early LIMBONIC ART or THE HOWLING WIND, and the direct songwriting approach of late BEHERIT. The Hellthrasher Productions reissue opens with a bonus track not present on the original 2016 digital release, ‘Lobotomization Portal Ascent’. A song that starts with crystalline guitar melodies before evolving to a mid-tempo Speed Metal phrase, whose consistency ultimately gives way to a chaotic textural second half mired with dissonant riffs and overlapping vocals. ‘Talisman Fire Eye’ opens with a mid-tempo blast beat behind an atmospheric riff, eventually grinding into a trance-like, textural spread of contradicting duel guitars and heavily reverberated vocals. ‘Psychophilic Volts’ follows a similar intro formula utilized in ‘Lobotomization Portal Ascent’. The intro phrase is more elongated than the previous tracks, making use of stacked guitar channels and a bright accent lead to serve as a beacon through the audio fog. The use of constant contrast between the order and chaos of the guitar work paired with the constantly shifting percussion signals to current-era DEATHSPELL OMEGA, except less dense and more prone to convention. ‘Deprogrammation Entranceptor’ closes the EP, following the formula exhibited throughout the earlier songs. The more direct first half of the song is counterbalanced by a snarling, frenzied closing half. The production on “Shamaniacal Essence” is reasonable. The drums and guitars are directly front and center with the vocals taking more of a backseat in the mix. Saturated middle frequencies wax and wane to accommodate warmer lower frequencies and shrill, alarm-like high sections. Vocals are often washed with a bit of delay and reverb to expand and populate the sound. ECFERUS produce a solid display of quality songwriting, a strong balance between genres, and has enough challenge to keep listeners from shelving it. Alp manages to write songs that are, at the root, conventional in their execution but enriched by unbridled tones and phrases that build the song up in to mountains. For more information on ECFERUS, check out www.facebook.com/ecferus. Hellthrasher Productions’ website is located at www.hellthrasher.com.