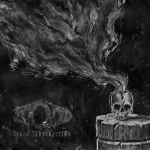 Second album from this USA Death Metal trio that is not that far away from what they achieved with their debut album. And that is a very good dose of evil Death Metal very much in the vein of INCANTATION with a few doses of IMMOLATION and some BOLT THROWER for a good mix. If it is not broken why change it? Compared to their debut album I find this new one brighter in their sound and less cryptic sounding, although the style is the same. I also sense that the style here is closer to the more technical expertise of IMMOLATION rather than the suffocating INCANTATION style of Death Metal. At times I get a vibe similar to SORROW, the NY band that only released one great album and that used doomy passages with great speed outbursts and use of sinister melody, although ECTOVOID is more grotesque in approach. If I am to compare the debut and this new one, I think the debut has a more interesting approach, but this one has better songwriting. Fans of suffocating and well done Death Metal will surely like this one. And it is not a bad idea to get their debut album too. www.facebook.com/ectovoid, www.hellthrasher.com

Julián “A Prisoner Of Paradox” Núñez

Julián "A Prisoner Of Paradox" Núñez