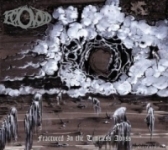 From Alabama, USA, comes this trio that truly knows their stuff. I mean, if we primarily want to restrict this talk to some dark and heavy sounds of underground Death Metal in the late 80s / early 90s. ECTOVOID is the name of this very underground-ish sounding band – and I believe the guys in ECTOVOID undoubtedly are huge fans of early DEMIGOD, CONVULSE, IMMOLATION and AUTOPSY especially. Everything within their music reeks of those jolly-good underground times when some certain Death Metal bands were just putting together and recording their first demos, just to make that indelible first impact on their listeners. ECTOVOID have been digging the old ground carefully, to find those exact important pieces of bones and some dry skin of ‘the ancient ones’ around their own Death Metal corpse – and they have succeeded at that very darn well in my humble opinion too. "Fractured In The Timeless Abyss", this 9-song debut studio album from these 3 fellows, does impress the hell out of its listeners really, venturing into those areas of old school, murky and immense heavy Death Metal that made many of our days worth some extra thrills back in the day. And without knowing a thing or two about this trio in advance, I could swear there’s Chris Reifert playing the drums on this release. This other Chris’ (McDonald) playing style is so similar to Chris’; everything what he does behind his drum kit, does remind me of Chris’ drum techniques on AUTOPSY’s releases. ECTOVOID’s debut album is a sweet release in many ways, showing a gateway back to the days when Death Metal was just becoming a new noteworthy sub-genre of Metal music. Therefore it’s very hard to not like this release; it’s got basically everything one can demand from a true, old school Death Metal album. The songs, the feeling, the vibe, the album cover, etc. – it’s got it all. Fuck yeah… this is some killer shit! http://soundcloud.com/ectovoid, www.hellthrasher.com