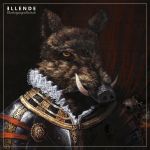 “Ellenbogengesellschaft” is the fourth album by the one man project ELLENDE from Graz in Austria. The band’s name is taken from an old German word for “exiled” with a negative connotation. The basis of the word can also be found in German “elend” which translates as “miserable”. And that might be the whole review, as the songs on “Ellenbogengesellschaft” really are miserable. You know, I really dig some fine rabid Black Metal as well as atmospheric Black Metal, I really am tolerant, as far as music is concerned, and I never mind some well placed breaks and surprising twists in a song. But the music ELLENDE presents on this album is definitely too much for me. Some of the raging Black Metal parts really sound promising, but they won’t last long enough, as there comes a break in pseudo Ambient or Gothic Pop style too soon. The compositions leave the impression that some ideas are just patched up hastily to create something spectacular or atmospheric. Instead it’s nothing less than confusing and pesky. Those “atmospheric” parts often sound so pathetic, cheesy and cheap, it makes me want to cry. The fact that I am a native speaker and understand at least a part of the lyrics doesn’t make the album any better. And if there are parts that even remind me of the ineffable German Gothic project UNHEILIG, my tolerance is overloaded and I am ultimately out! Sorry, but I can only recommend ELLENDE to musical masochists. In that case, visit https://ellende.bandcamp.com or www.facebook.com/aoprecs