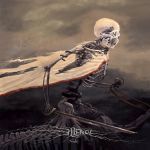 ELLENDE is a band that everyone interested in the Black Metal scene should be aware of. They have a particular approach to the genre that is instantly identifiable and very fresh. It is simultaneously soft, tragic, atmospheric, despairing, raw and aggressive. “Triebe”, while it is a reworking of a previous album, is still something new and exciting for the band. One of the first things I notice in comparing this album to “Weltennacht” (the original release of these tracks) is the presence in the vocals. Typically, ELLENDE has a tendency to keep the vocals in the background, which I appreciate. There’s a drone-like quality to their music that is easy to get lost in, and keeping the vocals at a distance maintains this sense of space. “Triebe”, however, brings the vocals right to the center stage, which really changes the mood of the music. If you are familiar with “Weltennacht” you will especially notice this change. Adding to this new vibe is the drums, which have a lot more flair than is typical. Again, this takes away somewhat from the drone aspect of the majority of their catalogue. The smooth and easy predictability has shifted somewhat into unexpected fills and cymbal hits keep you on your toes, as well as a more direct and punchy sound. To be honest, I’m a little apprehensive about this, because for me, ELLENDE is a band I will put on to relax and get lost to. It’s hard to say if this new vibe is indicative of a change in direction for the band, or simply an experiment in how different approaches can affect the same songs. Overall though, I’m into it. There are some undeniable improvements in “Triebe”, most notably ‘Triebe II’ and the introduction to ‘Zwischen Sommer Und Herbst’. However, perhaps the best way to listen to this album is not in comparing it to “Weltennacht”, but to think of it as something new entirely. In that sense, I think it serves as a great introduction to the band. Their reworking of ‘Triebe’, now titled ‘Triebe II’ shows some of what I believe is safe to say is the band’s new direction. I just hope they don’t deviate too far from the beauty of their wandering and hypotonic song structure, soft playing style, and sophisticated instrumentation. More about ELLENDE at: www.facebook.com/ellende.official, label contact: www.facebook.com/aoprecs