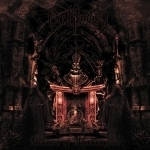 First off, hands up those of you who have heard about this Polish symphonic Black Metallers ENTHYMION before? Secondly, hands up those of you who don’t turn your backs right away for such a word monster as ‘symphonic Black Metal’, thinking immediately of something ridiculously commercial like DIMMU BORGIR for example? Good, good… "Arcana Of Apocalypse", the title of this already disbanded (what a pity!) Polish Black Metal quintet’s first – as well as unfortunately last album (for now at least), is just an amazingly hook-filled, well produced and catchy symphonic Black Metal album, in which pretty much all elements of a so-called top quality Black Metal release are introduced in one single package. The album’s got lotsa serious depth to it; there’s huge amounts of melody, there’s 10 equally fine songs with crazy amounts of intensity and all-horizons painting. majestic atmospheres – and there’s about all that on "Arcane Of Apocalypse" why this band still should exist. Without a question, ENTHYMION had this album in the making a long time, and they were pushing the envelope as hard as they could – and the result is something truly outstanding here. I can hear some early DIMMU BORGIR influence sticking out from this stuff – and I can also hear Jon Nödtveidt type of good nose for some top-notch songwriting qualities and I can even hear a few lightly passing moments of CRADLE OF FILTH type of soul-ripping and harsh riffs here and there, giving a welcome, yet so powerful punch for this totally pleasing wholeness. "Arcane Of Apocalypse" is a wet dream for all symphonic Black Metal suckers in its own little scale. Having said that, it’s just too bad there’s no continuation in sight for this geniusly composed Black Metal release from the ENTHYMION camp… dammit! ENTHYMION: www.facebook.com/pages/enthymion/160751390682908, label: www.morehate.com