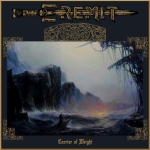 Besides the fact that EREMIT is from Germany there is not that much that I know about this band that was formed by just two doomed people that went on to release their debut album on India’s Transcending Obscurity Records. To say they just play Doom Metal will be… incomplete. They are also referred to as a Sludge band, which is basically also a way to say the band plays slow, heavy and dense. The bass is omnipresent in the entire recording, which results in an oppressive and bombastic feeling. That, combined with the slow tempo of the songs and the tortuous screams of death and agony, gives the band a suffocating aura. I wonder if they ever used guitar and it is just bass… At times it reminds me of the old Doom band WINTER and sometimes touches of DISEMBOWELMENT can also be found, but there is also a lot of hypnotic riffs that at times remind me of some more experimental sounds yet keeping the Metal roots intact. The music of EREMIT is definitely not for everyone, even some Doom Metal fans will find it too much trance-inducing, whilst the speed freaks will surely dismiss it. And also for having 3 song in almost 70 minutes of music is not for everybody. EREMIT is German for hermit so this music is done for people who loves desolation and heavy bass sound. Yes, at times it is atmospheric, yet in my case I need to have a special state of mind to enjoy it. Fans of deep, dense Doom Metal and who love to live in solitude with the weight of the world on their shoulders, look no further. www.facebook.com/eremitdoom, https://tometal.com