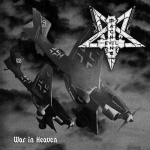 At first sight, the cover of EVIL MACHINE’s first album “War In Heaven” is a little confusing, since it depicts two German Stuka bombers of World War II, complete with insignia and swastikas. But checking out this Polish band made it all clear: No Nazi bullshit, since the members of EVIL MACHINE are also active in VADER and DEAD INFECTION, among others, and as guest musicians we have people like Seth from BEHEMOTH and VADER’s Piotr. So I was reassured and started to listen to ”War In Heaven” even with certain expectations. And EVIL MACHINE wasn’t a disappointment. Death Metal, mixed with Black Metal influences and certain straight Thrash Metal edges mean a very delectable cocktail of evil. The special strength of this album lies in the slower parts, which are not only a stylistic device, but a characteristic of EVIL MACHINE. Listen to songs like the doomy ‘Four Demons Of Apocalypse’ or the sinister masterpiece ‘Diabel’ with Cezar of CHRIST AGONY on vocals, my fave here. But also the faster opener ‘Cross Meant Death’ or the HELLHAMMEResque ‘Bloody Emperor’ are outstanding songs on an album that’s a joy to listen to. There are only one and a half downers here – the cover tunes EVIL MACHINE did. ‘Onslaught (Power From Hell)’, an ONSLAUGHT cover (what a surprise!), doesn’t catch up with the crusty spirit of the original and is therefore completely redundant. The cover of the classic VENOM hit ‘Die Hard’ is not that bad at all, but it’s also not outstanding or even special, only middling. But asides from these two, I can only advice you to check out “War In Heaven”. Surprisingly, all this fine stuff got recorded in a period of no less than seven years, something you won’t recognize if you wouldn’t know. And the sound is pretty old-fashioned, not sterile or overproduced, which is another advantage. Visit: www.facebook.com/evilmachineband or the label www.arachnophobia.pl