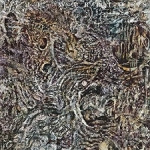 Leipzig, Germany’s EVIL WARRIORS are a difficult band to pinpoint. The band name sounds like an 80s Thrash or Power Metal name by a band that really put no effort into naming themselves. Musically, there are mostly Black Metal elements, with some Thrash and Death infused within. But oddly enough, their sound all works together nicely. Consisting of Beast (guitars and vocals), Alastor (guitars) and Exesor (drums), the second full-length "Fall From Reality" is a solid delivery for a band that took seven years between albums. The opening track ‘Fall From Reality’, with its foggy guitars, quickly becomes a track with more encroaching guitars and pounding drums before the echoing vocals burst forth around two minutes in. There’s almost a late 90s Black Metal vibe lingering around. ‘Excess’ is at first a mid-tempo rhythm before blasting into a sound reminiscent of SACRIFICIUM, though most likely not intentional. It harkens back to the days when atmosphere mattered in the overall soundscape. The hissing, raspy vocals scream for attention, but don’t overpower the track. ‘Pillow Of Cold Water’ is an oven-fueled miasma of twin guitar sounds and machine-gun drumming. Acoustic guitars slow down the pace a little in ‘Reincarnation’ before dissolving in a mesmerizing swirl of enveloping sound that nits and picks at your senses until steadying out in a stream of pure Black Metal ecstasy. ‘Idleness And Doom’ is just what the song implies, but only for a few seconds. Then the churning, chaotic wall of aural pleasure takes over. ‘Mania And Passion’ is a demogorgon of furious devastation, taking off at breakneck speeds. Quite frankly, this track kicks bestial ass. More acoustic guitars bleed into melodic electric guitars which are replaced by a thunderous uproar of filth and decay. The final track ‘All The Stars’ is yet another Black Metal victory in terms of supplying us with exactly what we need to hear. Abominable band name aside, EVIL WARRIORS are a force to be reckoned with. Very miniscule Thrash and Death wander around. But their Black Metal mastery takes center stage on "Fall From Reality". For more information, check out www.facebook.com/evil.warriors.excess, www.war-anthem.de