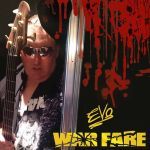 If the name EVO and an album title like “Warfare” rings a bell in your mind or even sounds familiar, you’re either an old geezer like me or very familiar with the history of Metal. Yes, it really is that EVO, Paul Evans, nearly only known under his nickname and best known for being the drummer, singer and main man of veteran English Metal Punk pioneers WARFARE. Back in the days, the mid 1980s, the original line-up of that band released two cool albums and a bunch of sometimes chaotic EPs that still are worth checking out, thanks to that raw spirit of musical anarchy, or “Metal Anarchy”, to use an old album title of the band. As delightful as these albums were, so joyless was the end to the story of WARFARE: the classic line-up fell apart and with the new members, the band took a course that led into musical irrelevance and finally to the end of the band a quarter of a decade ago. Along with the band, also Evo seemed to have disappeared from the scene. Apart from two projects with Algy from TANK, WARHEAD (who released an album in 1995 and also featured Würzel of MOTÖRHEAD), and EVO / ALGY who haven’t released anything yet (huh? How about the EVO / ALGY "Damned Unto Death" EP?? – Frank), no musical activities of Evo were reported. But now, like a bolt from a blue sky, this album is here, released under the name EVO. And in fact it is little more than pure Evo, who recorded nearly all by himself. Of course he got a little help from his friends like Lips or Fast Eddie Clarke who chipped in guitar solos. And pure Evo in this case means a turn back to the roots. “Warfare” offers some good old-fashioned stuff that fits the name chosen. Songs like the opening triple ‘Cemetery Dirt’, ‘Misanthropy’ or ‘Pure Filth’ are in the tradition of old WARFARE stuff, hence the name of the latter! Of course these new songs are not as dirty, chaotic and raw as the old classics, but a little more polished, yet very enjoyable. But there is other stuff as well: the long spoken word-intro ‘Screaming At The Sea’ sees Evo tell a kind of a story of his life, for example. Or ‘Black’ that is a rather long progressive (in terms of Evo) and Punkish tune at the same time. Or the B-side opener of the vinyl edition, ‘This Man Bleeds Hate’, a (too) damn long song as well and thus a little unspectacular over the whole distance. ‘Burnt Out’ is titled not too wrong, but the crazy ‘Doctor Of Insanity’ with its saxophone brings back a little life into the album. Reminds me of older MOTÖRHEAD, by the way. A short instrumental called ‘Carnage’ leads into ‘Strangled’, another song in the manner of classic WARFARE. In the end, ‘Stardust’ confused me a lot, since Evo tries to sing on this more classic Rock inspired one that left me a little bit startled, even a tiny bit disappointed that this otherwise very nice comeback ended with such a redundant and unfitting song. Despite the little flaws, the very long break of more than twenty years did Evo good and so 2017 he’s not only ready to strike back in doing what he is best at, but he also has has a dedicated label backing him up with High Roller Records. So there’s no reason for anyone who liked WARFARE back then not to support EVO in 2017. Do so, visit his page www.facebook.com/people/evo-evans/100010703193337 and his label www.hrrecords.de