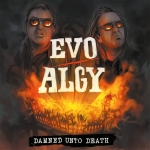 Two friends decide to team up and jam around a bit. Fine, it’s always fun to hang with friends and play some music, cover a few songs and maybe come up with some nice ideas on your own. But just because the booze and the ecstasy of friendship tells you your shit fucking rocks, doesn’t mean it really does. I admire both guys for what they did. I love the bands they played in (WARFARE and TANK – Frank). But this mini album is as worthless as my own opinion about it. Even worse, it’s close to be embarrassing. Why such a nice label as High Roller Records thought this might be a nice idea is their secret. But it’s the same old trap with big names teaming up. That combination never turned out good! If so, I don’t know which one ever did. So please write it down in the comments if I am wrong. The style is something between Heavy Metal, Hard Rock with very fluffy bass lines and a desperate “fuck off” attitude. I guess because High Roller smelled that rat, they of cause tell us EVO / ALGY “never cared for conventions” which just tries to somehow warn the people I think. Show me anyone playing in a band who wouldn’t say the same about themselves. Half of the album therefore is logical cover songs (because they don’t care for conventions). MOTÖRHEAD, THE SAINTS and STATUS QUO are being used to express their attitude of beers, cunts and all the anger they feel. That’s lame, washed out and as entertaining as the Autobahn. And if they slow down even a bit more you can read a book between the bars. So I take it with the first words of last song ‘Tune To The Music’: I am fucking bored. (Luckily tastes are different, because I personally really enjoyed this release. It’s a helluva lot better than the last disastrous TANK album "Breath Of The Pit" and really entertaining to listen to, especially due to its very Punk-ish overall attitude and straight to the bone material. Of course it doesn’t live up to any TANK or WARFARE classics, but together Evo and Algy still made my day! – Frank) More info at www.hrrecords.de, www.facebook.com/pages/high-roller-records/137170149638274