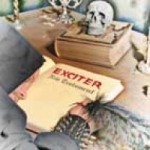 We survived the retro-mania, we passed through the reformation-mania, now we face the "record from scratch"-mania. JAG PANZER did that not so long ago (as ICED EARTH and GAMMA RAY it seems, but I don’t care about these last two anyway), and now it is the turn of EXCITER to come up with new versions of old classics. The result? As you can guess, this disc leaves a foul aftertaste. I don’t see the point of touching already perfect tracks (despite the imperfections that precisely made them unforgettable). No offence to the (volatile) vocalist Jacques Bélanger, but he is not Dan Beehler for sure. And maybe he has jumped into boots too large for him in the first place, trying to sing on classic songs every self respecting Metalheads knows by heart. Jacques is a good singer as it is obvious on the two excellent and underrated albums EXCITER did for Osmose until now ("The Dark Command" and "Blood Of Tyrants"), but he can’t make it when he sings on material not composed for and by him. Believe me, it is awkward to listen to ‘Stand Up And Fight’ and ‘Violence And Force’ in their 2004 format. The question of the sound quality put aside, the "revamped" and "enhanced" (in the mind of the present band members at least) old tracks appears here banal and ravaged. EXCITER have always played a linear form of basic Heavy Metal, but the frenzied Beehler vocal delivery as well as the tortured soloing of John Ricci made the difference. Strip down these two elements and only the linearity prevails for the most boring and annoying effect. And so it is: throughout this CD, the band give the impression they run down a set list like it is a job to be done with competence but without caring too much for it. Not surprisingly, the band sound at their best on the 5 Bélanger-era tracks (out of 15 in total). The rest of the tracks come out of such classics albums we all know so well ("Heavy Metal Maniac" (4), "Violence And Force"(2), "Long Live The Loud"(3) and "Kill After Kill"(1). Like I said, John Ricci appears like the shadow of himself, he has sort of tamed down his guitar playing; less dirty than before I’d say. If this album should give a lesson, it could be this one: let the past bury the past. So in the end an unwise move in the EXCITER’s camp and then I can’t recommend this album to you.