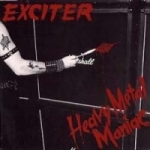 Here is the third reissue of this monumental album, after the pitiful one on the Roadrunner “Price Killers” series a long time ago (basically the vinyl transferred on CD, complete with the cracks and pops, a shame), and the one on Old Metal Records a couple of years ago (the latter I have never seen). Well, I have mixed feelings about this one. I think we were in the right to wait for much, much more than for what we actually got, especially in the layout department. Such an important album as “Heavy Metal Maniac” would have deserved a very special treatment, in particular a thick booklet full of photos, flyers and abundant liner notes. Instead of that, we got a four pages affair with basically Dan Beehler and Allan Johnson (no, no John Ricci) saying hello, and the inevitable photo with METALLICA, strange that a lot of great artists feel the need today to be acknowledged by these buffoons (“I met Lars backstage and he said I was an OK guitar player”, “I shook hand with Kirk and I felt good”, here is the kind of shit I am tired to read everywhere in the press, disgusting really). This reissue at least beneficiates of the great restoration work courtesy of Mr Jeff Waters, the sound can be compared to the one on the Shrapnel first edition on vinyl, and the dynamic is incredible. When you think that “Heavy Metal Maniac” was initially recorded on an 8 tracks machine, the result is unbelievably heavy, even for these days. Among the bonuses, you got the track ‘WWIII’ from the “US Metal” compilation, plus (and strangely) ‘Evil Sinner’ that for me belongs to the “Violence And Force” album anyway. In the case of the latter song, let’s say that Jeff Waters did a great job to redeem the catastrophic Carl Canedy “production work” (what a buffoon this guy was too!). Also, the CD ends with three interview segments from a Canadian radio shows, a cool idea to make us catch with the vibe surrounding the rise of the mighty EXCITER! I think there is no need to discuss on the music any further, maybe only our youngest readers don’t know about this classic album, and I am not even sure of that. “Heavy Metal Maniac” still sounds fresh today as more than 20 years ago; this is the supreme mark of talent I believe. Their mix of BLACK SABBATH, SAXON and JUDAS PRIEST makes EXCITER the pioneers of Speed and Thrash Metal. “Heavy Metal Maniac” stands as an ultimate classic of the Metal genre, and everybody should have this one in his / her collection. This is too bad the EXCITER saga turned sour after the “Long Live The Loud” album, the original line-up is without peer and raised magic in the air. Despite its minor flaws, this reissue is essential, that goes without saying of course!