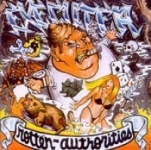 It’s really great to see that more and more old Brazilian Cult Thrash vinyls getting re-released these days. After VULCANO, MUTILATOR, MX, HOLOCAUSTO, SEXTRASH, EXPULSER, ATTOMICA and many more also EXECUTER’s debut album “Rotten Authorities” sees the light of day again. Even if the band was founded back in 1987 you can consider it as the 2nd wave of the Brazilian Thrash movement. Unfortunately their classic debut didn’t get the attention it deserved (at least not here in Europe). The reasons for it were among others that it was only released by a small underground label which had no good distribution worldwide and most of all the album came out at a time where Thrash Metal wasn’t that popular anymore (first release 1991) and Death Metal ruled the scene supreme. So thanx to Marquee Records who are responsible for releasing this nice underground gem for the first time on CD. So there will be no excuses anymore not to get this excellent album. EXECUTER are totally in the Brazilian tradition which means that they play merciless, violent Thrash Metal with relentless speed and power. Influenced by bands like old SODOM, SLAYER, KREATOR and other cult acts. Totally pissed off by the situation in their country, the corruption and many other problems these four maniacs unleashed their anger and hatred upon mankind. The result is a intense and cool Thrashhammer. Due to the re-mastering the production of the nine tracks got more dynamic than the vinyl version. The regular album is enhenced with a lot of bonus tracks taken from the band’s demo tapes “Hate And Violence” (1988, 2 tracks) and “Demo Tape III” (1989, 3 songs). Of course the sound quality on the demo material is not so good than on the LP tracks but at least you can hear some of the tracks in a rawer, unpolished form. The packaging is very nice and dedicated which features besides old pictures also some informative liner notes and the lyrics of the album tracks. EXECUTER also have been reformed a couple of years ago and released a very strong “Psychotic Minds” album in 2003. So all Headbangers out there who are into tradtitional Thrash Metal without trendy shit, played with total passion and straight to the point should get in contact with Marquee Records at www.marquee.com.br or the band www.executer.ws.