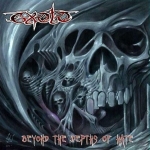 EXOTO
Beyond The Depths Of Hate
(Vic Records)
62:23min

I know this band. Yes, I have their debut CD and I think a 7” EP somewhere… a band I thought was long dead. And much to my surprise this is not a new album, but these are anyway new recordings of old songs. A move that seems a bit strange if you ask me, but also I can comprehend bands wanting to re-record old songs with better arrangements that are only available as demo recordings, and more so if those are from well over 20 years ago. Well, the band did it and I must say “good for them”. The music style of the band has not changed a bit, it is Death Metal with a strong Thrash Metal sound, not far away from what bands like SEPULTURA, MALEVOLENT CREATION, DEAD HEAD, NUM SKULL and so on created back in the day. Now, with a good production I am sure some of those songs will shine more than the more primitive recordings of old, if maybe I think the snare sound of the drums could be better. If EXOTO was never considered a cult band there was a reason for it: they were just OK and did nothing else what many other countless bands did in the same days. I still feel that the songs needed something to be better. More riffs, better riffs, something is missing here. As a way to get into the band, this is a good way to have a kind of discography with actual sound. Yet, no matter some riffs have that old school sound and attitude, there is something missing that makes the band sound a bit generic in the style. I am afraid that if they keep the same style for new songs, nothing out of the ordinary might come from. Although, I am always willing to be proven wrong, as it is, and no matter how old the band is, this re-recordings and style is quite frankly too outdated. www.facebook.com/pages/exoto/415058545194901, www.vicrecords.com